The Interactive Adventures of Jolly Jo
(Dear Joanna Muir Davies, I altered both your text and mine slightly - hope you don't mind?)

Away from the Battlefields

The square, more like a carousel really, has a little bed of yellow and blue flowers in the middle, from which a sign sticks out saying 'hesitation'. The bed is well made, with a forget-me-not pillow, a hyacinth blanket, and a daffodil duvet which makes a nice contrast. But you are not looking for any blue flowers, are you? Around the bed of flowers circles the gravy path which has replaced the yellow brick road under your feet, and while the (strictly vegetarian, I assure you) gravy sticks to your bare feet, you think that gravel would have been a better idea. However, it can't be helped, and so you walk around the carousel clockwise (i.e., counter-clockwise for ordinary people - you had to buy that wrong-way-round watch, didn't you?), looking at the signs that name the four exits.

The road you came on is named 'No way!' from here, though you see some scratches and traces that suggest there once was an 'r' between the 'No' and the 'way!' which has been erased. Both readings smell rather yellow to you, and you never liked Reading, anyway (awful town, that - you wouldn't wish your worst enemies into its jail, let alone good old Oscar). So you contemplate the other three possibilities. The first of them is called 'revelation', and its emerald asphalt tastes soft under the soles of your delicate feet. Number Two, 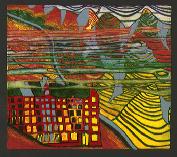 the one leading straight ahead from where you came from, is called 'deviation', and though the sign sounds like a street situation report with lots of static noise in the background, it rather appeals to you by its peachy look and furry smell. You are a bit in doubt, though, about just how devious the deviation might be. 'Penetration', the third of the forks, is not an ordinary road, but a giant horizontal mirror meandering all the way to the horizon - like a river, if it is allowed to reverse the usual methaphor in which surfaces of waterways are like a mirror.

INTERACTIVITY: Which of the exits do you take? Do your bare feet want to tread the soft emerald asphalt of 'revelation', does your nose want to behold the furry peaches of 'deviation', or are your eyes keen on seeing yourself turned upside down on the way to 'penetration'?

ANSWER: I want to feel the soft asphalt squeeze a pathway between my toes, into the tiny cavities under my toe nails, and to slowly crawl up my left leg...

After circling the bed of flowers once, twice, thrice, or even darts, you decide to feel the soft asphalt squeeze a pathway between your toes, into the tiny cavities under your toe nails, and to slowly crawl up your left leg... But as you put your left foot

down on the emerald green, you find that the asphalt's softness is rather of the elastic than of the sink-into kind. Actually, it is of a very elastic kind, and far from being disappointed about not having it squeezing and crawling, you begin to use its bounciness for your faster progress: with every time you bring one of your feet down, the length of your step increases, until you are rather jumping along the emerald asphalt road towards revelation than walking it.

After a few yards, you encounter an invisible wall. Since you don't see it, and since it is not across, but by the side of the road, you don't really care, and though it smells brickish, you can't hear what colour it is, so you don't know how bite it is (because you remember the saying your grandma, the wolf, used to repeat over and over again: 'The greener the crocodile, the bite').

The road is, on both sides, accompanied by ditches. Before you can really find out what kind of company they are - good company, the sort of  company one diesn't want to be seen in, or even an unlimited company -,  you find a teacup in one of them.

The teacup is soft and tender to the touch, inside is a mild mixture of yellow gloves. The pattern is that of fried bacon steaks, with a smear of ketchup (I should stop this diet...)

What do you do with the teacup, if anything?

As you lift the teacup to your mouth you notice an inscription written along the interior rim of the cup, which reads, "find your way up". Heeding the suggestion you gaze up into the marmalade sky, now approaching a smellier olfactory hue of burnt kumquats, and see the escalator. Defying the laws of gravity, physics, logic and nonsense, the mystically powered staircase is moving both up and down simultaneously. After hurling the teacup at the invisible wall (yellow glove tea is highly overrated you think) and watching it transform into a Hindu-like deity which skitters away chittering... you leap onto the escalator using the springy surface of the emerald asphalt. Once on, you feel an unparalleled sense of ambiguity that cuts right through the Prozac, and you find your spiritual self slowly separating from your corporeal self. Your spirit form seems to be heeding the advise of the teacup/deity and your corporeal form succumbs to the downward effect of the cosmic escalator. With a sudden shift, you consciously will your two selves back together, and you find that instead of an escalator you have been teleported onto the back of an elephant sized burgundy salamander which is swimming up a river of molten lava. In the distance you see you are headed toward a large dark cavern with a grizzled bear of a man guarding the entranceway in a boat which is suspiciously similar in shape to a giant teacup. The sentry lifts two large graham crackers from the boat/cup and mashes a large marshmallow between them.. "Wait", you shout, "you forgot the chocolate."   (written by Ken)

How do you go on? Do you challenge the sentry?

I pull out warm but not squishy chocolate kisses and hugs from my pocket, place them in my right hand like a magician about to reveal a great illusion. The little tiny paper pulls stick up and wave gentle in the wind of the surely sentry's heavy breathing. I pull one open, with marmalade fanfare, and declare loudly and sternly, "YOU FORGOT THE CHOCOLATE". The sentry turns into a yellow tea cup in a boat. I tether the boat to the salamander sized burgundy elephant and continue on. (Amy interacted)

The chocolate incident has cost you some energy, you notice as you walk on in into the mouth of the cave in chameleonskin walking boots that you've pulled out of your rucksack. Looking back, you see the yellow tea cup in the giant tea-cup shaped boat tethered to the salamander sized burgundy elephant transmogrify back into a sentry which is suspiciously similar in form to some hindu-like, many-armed deity. That bear of a man is getting smaller as you walk away into the dark, and with him that speck of light which is the entrance of the cave. You may not have noticed yet, my dear, but you're on your way out of the light, into a darkness, darker than any night you've ever made it through in your life, darker than the lungs of a octogenarian chain-smoker, darker even than the soul of an average American president. Darker than everything you've ever experienced. You begin to stumble on the uneven ground of the cave, kick against stones and hurt your toes, chameleonskin being soft and flexible (especially in colour) and not very protective. The light dwindles. It's only a pinprick now. But you notice a reddish glow within the cave, like the colour you see behind your eyelids on a not too bright day in July (Northern Hemisphere). As your eyes adapt, you become adept in circumnavigating the obstacles on the ground.

But it's getting hot in here. Must be that glow, which is becoming brighter. It shines the shade of pomegranate. Your chameleonskin shoes, dutifully changing their colour to match the glow, attempt to shine the same wavelength - and melt from your feet. Only a few steps further down the narrowing cave, you have to stop: broad rills runnel across the stony floor, rilling like runnels, seeking their way between little rocks and arkansases. Steam steams forth from its surface. You can't just step or jump across, the rillunnels are too grossly criss-crossing, there's hardly a place to set even such a dainty foot as yours. The hot liquid, looking suspiciously little poison, mercury or acid, more like plain water, actually, seems shallow.

Will you wade in the water with your bare feet?